Next Monday, Americans will be staying home from work in celebration of Labor Day. In Bangladesh, next Monday will also be a very special day, though for different reasons - it will be the beginning of Ramadan 2008.

Around 90% of the population of Bangladesh are Muslim. So, much like Christmas has become a quasi public holiday season in the US, Islamic holidays have a significant imprint on public life in Bangladesh.

Ramadan is a month long religious observance during which Muslims fast from sun up to sundown. This fasting, called "roja" in Bangla, teaches humility and empathy for the poor and downtrodden. It 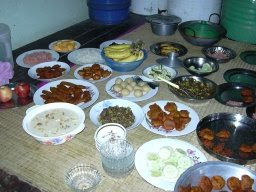 At sundown, or "iftar," the fast is broken. Often, the fast will be broken initially with dates and sharbat, a rose water-like drink. Iftar is a time when people come together to share food and conversation, resulting in grand meals of savory snacks.

And throughout Bangladesh, roadsides will be filled with iftar stands selling a variety of delicious foods. 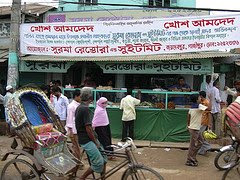 But Ramadan is not all about food (or the lack thereof), it's also a time when Muslims reach out to the poor in their communities by paying "zakat," or alms. Islam requires adherents to give 2.5% of their wealth to the poor every year. Often during Ramadan this charity is distributed.
Posted by SCO at 8:54 AM No comments:

Email ThisBlogThis!Share to TwitterShare to FacebookShare to Pinterest
Labels: Islam 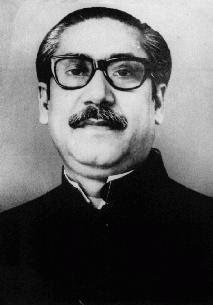 Today is August 15th, and it's the 33rd anniversary of the assassination of Sheikh Mujibur Rahman, the first President and Prime Minister of Bangladesh, and the father of the nation.

Known as Bangadandhu, or "Friend of Bangladesh," Sheikh Mujibur Rahman is a larger than life figure in history, and is revered in Bangladesh as George Washington is revered here in the United States. In fact, there are many parallels between the American Revolution of 1776 and the Bangladesh Revolution of 1971.

Below is a speech by Sheikh Mujibur Rahman with audio in Bangla, but translated into English for the convenience of us bideshis. This is a good introduction to the events of 1971 and the resulting independence movement. It's also pretty clear why Bangabadhu was such an effective leader.

On this day in 1975, a group of junior military officers staged a coup d'etat and assassinated Sheikh Mujib and his entire family. His only family members that lived were two of his daughters who happened to be visiting Germany at the time. One of those daughters is Sheikh Hasina Wajed, who would become the head of the Awami League political party in Bangladesh and serve as Prime Minister from 1996 to 2001.

Today, Bangladeshis the world over are pausing to remember this great man and his sacrifices that ensured the liberty of his people.
Posted by SCO at 7:05 AM No comments: